Knowledge of the structure and the function of the human body are essential for those planning a career in the health sciences. It is the basis for understanding disease. In this unit, anatomy and physiology are defined, the body’s structural and functional organization is explained and an overview of the characteristics of life and homeostasis is provided. Finally, terminology and body plan are presented. 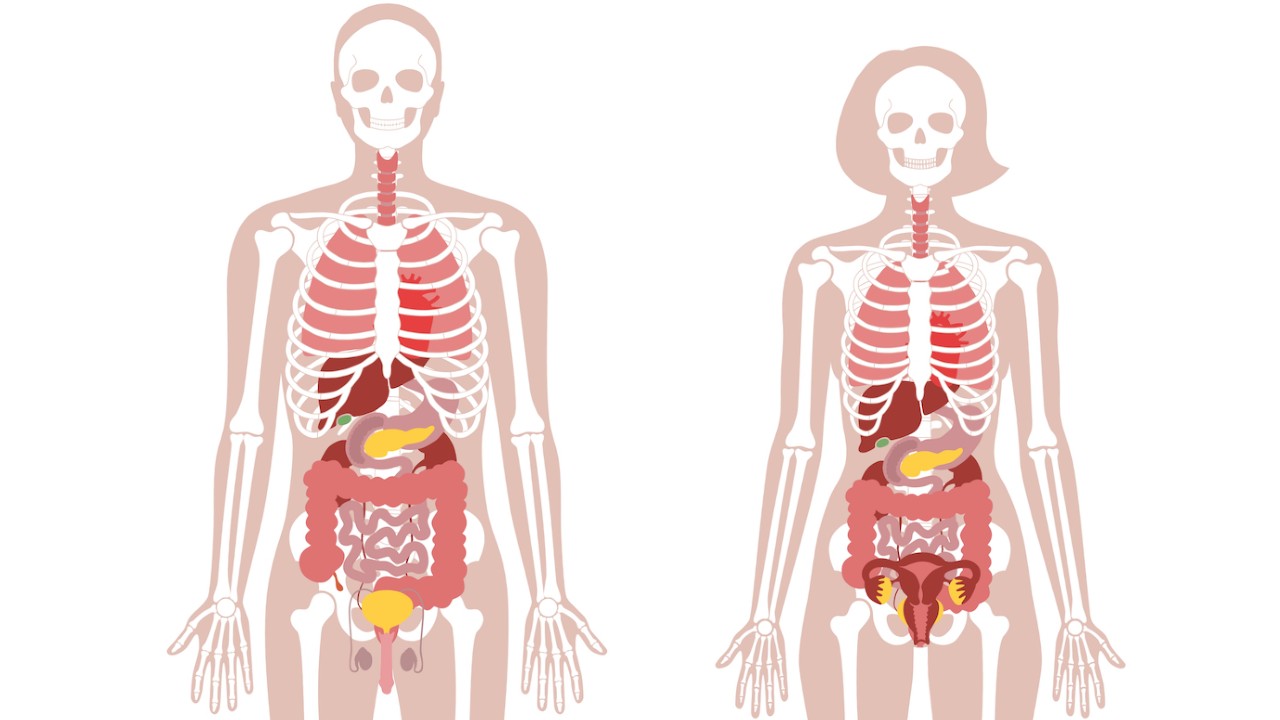 Anatomy is the scientific discipline that investigates the body’s structure. It describes the shape and size; it examines the relationship between the structures of the body parts and its function. The structure of a specific body part allows it to perform a particular function. Understanding the relationship between structure and function makes it easier to understand and appreciate Anatomy. Developmental anatomy is the study of the structural changes that occur between conception and adulthood. Embryology is a subspecialty of developmental anatomy that considers changes from conception to the end of 8th week of development. Cytology examines the structural features of cells and histology examines tissues, which are cells and the materials surrounding them. Gross anatomy is the study of structures that can be examined without the aid of a microscope. It can be approached from either a systemic or a regional perspective. In systemic anatomy, the body is studied system by system, which is the approach taken in most introductory textbooks. In regionally anatomy, the body is studied area by area. Within each region, such as the head, abdomen, or arm, all systems are studied simultaneously. Surface anatomy is the study of the external form of the body and its relation to deeper structures.

Physiology is the scientific investigation of the processes or functions of living things. The major goals of physiology are to understand and predict the body’s responses to stimuli and to understand how the body maintains conditions within a narrow range of values in a constantly changing environment. The study of the human body must encompass both anatomy and physiology because structures, functions, and processes are interlinked.

Human beings are arguably (questionably, perhaps) the most complex organisms on this planet. Imagine billions of microscopic parts, each with its own identity, working together in an organized manner for the benefit of the total being. The human body is a single structure but it is made up of billions of smaller structures organized at six levels: –

1. Chemical level: Involves interactions between atoms, which are tiny building blocks of matter. 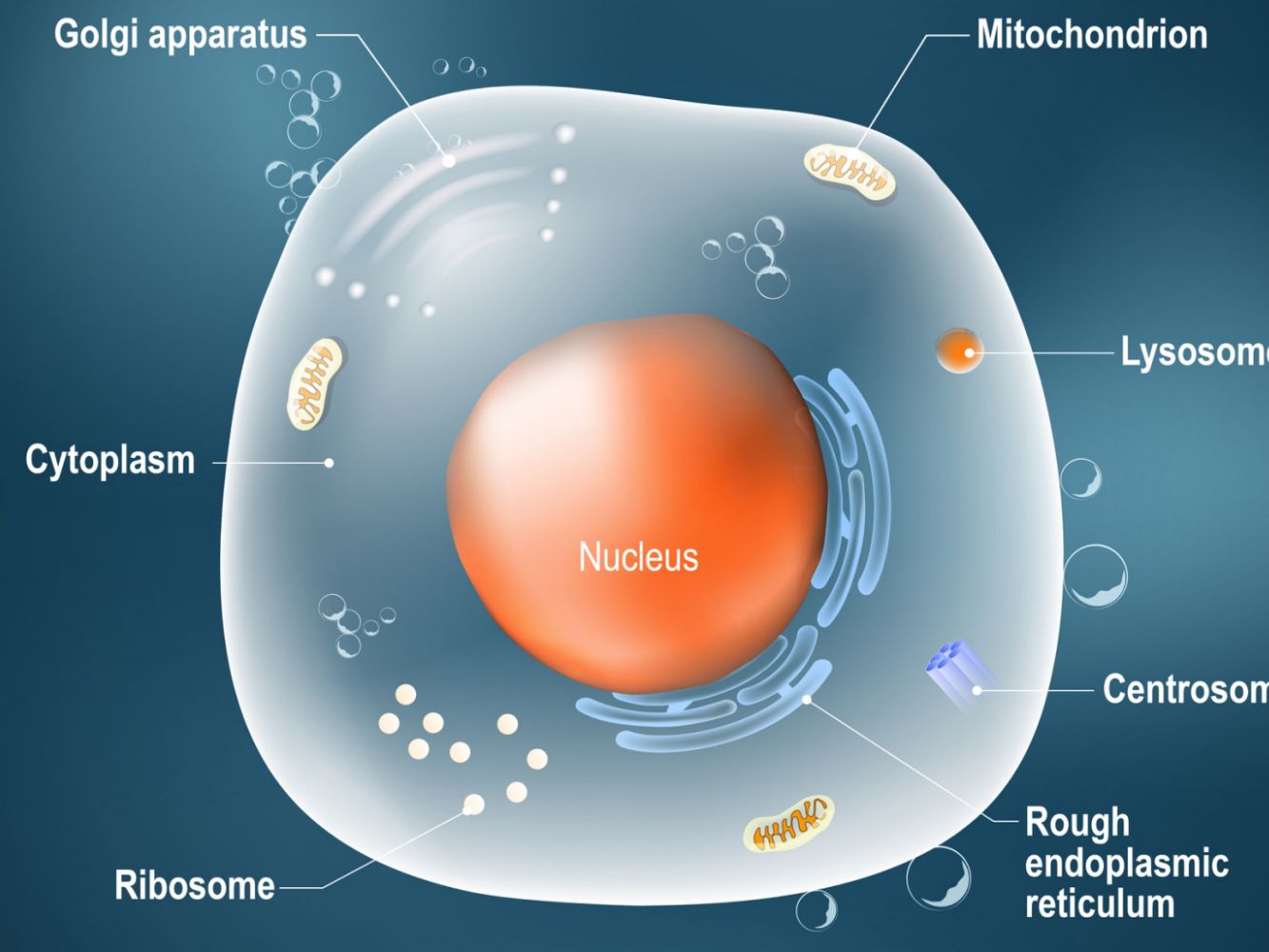 2. Cell level: Cells are the basic structural and functional units of organisms. Atoms combine to form molecules. Molecules can combine to form organelles, such as the nucleus and mitochondria which make up cells. Cells has long been recognized as the simplest units of living matter that can maintain life and reproduce themselves.

3. Tissue level: Tissues are somewhat more complex units than cells. By definition, a tissue is an organization of a great many similar cells with varying amounts and kinds of nonliving, intercellular substance between them. The numerous different tissues that make up the body are classified into four basic types: epithelial, connective, muscle and nervous. 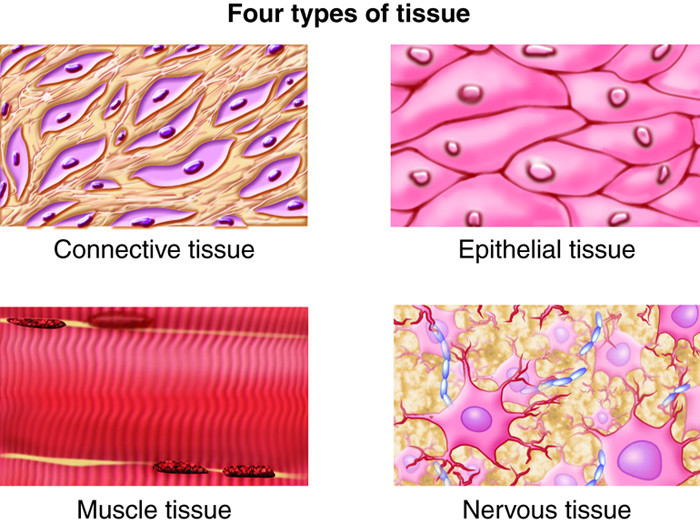 4. Organ level: Organs are more complex units than tissues. An organ is an organization of several different kinds of tissues (at least two types of tissues) arranged so that together they can perform a special function. For example, the stomach is an organization of muscle, connective, epithelial, and nervous tissues. Muscle and connective tissues form its wall, epithelial and connective tissues form its lining, and nervous tissue extends throughout both its wall and its lining. – 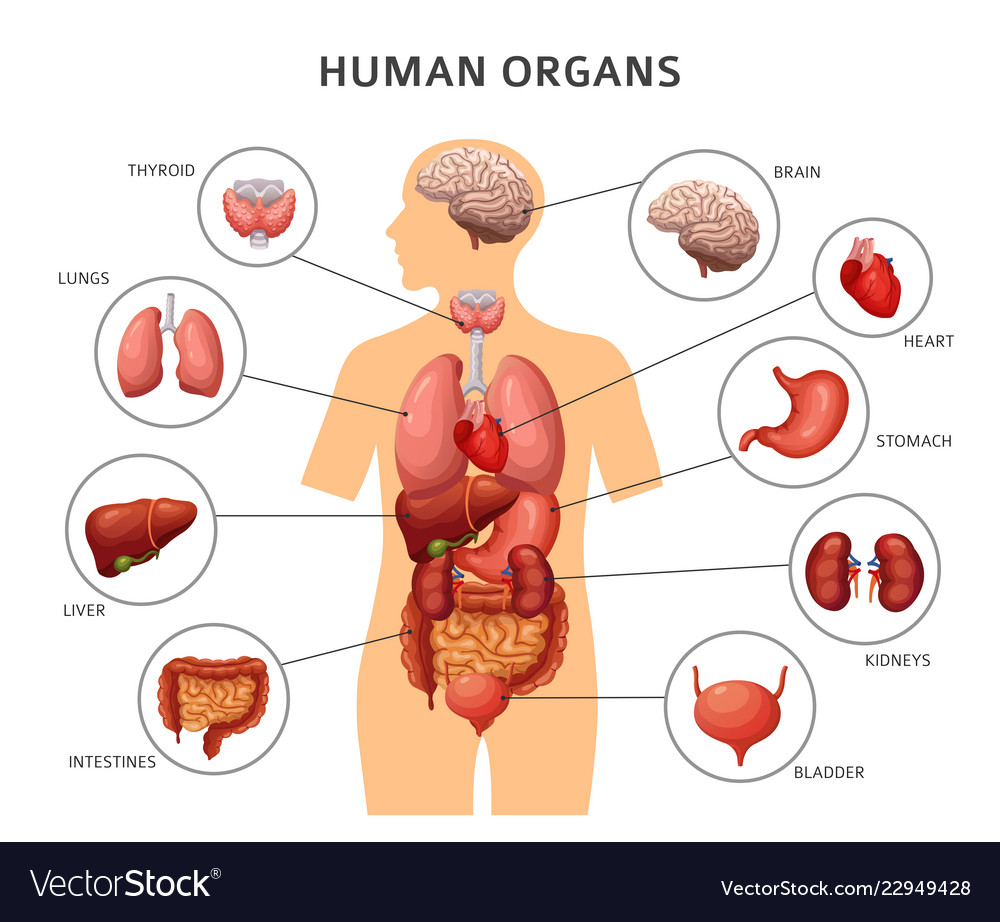 5. Organ system level: An organ system is a group of organs that have a common function or set of functions and are therefore viewed as a unit. e.g: urinary system (Kidneys, ureter, Urinary bladder and urethra). Eleven major organ systems compose the human body:

6.Organism level: An organism is any living thing considered as a whole whether composed of one cell, such as a bacterium, or of trillions of cells, such as human. The human organism is a complex organ system, all mutually dependent on one another. 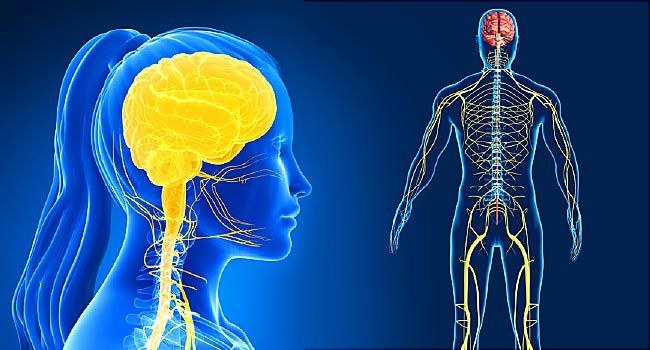 For instance, cnidarians such as jellyfish have relatively simple nerve nets spread throughout their body. Crabs have a more complicated nervous system in the form of 2 nerve centers called dorsal ganglion and ventral ganglion.

As we move further up the ladder, higher organisms such as vertebrates have a developed brain. Moreover, it is one of the most complicated structures in the animal kingdom, containing billions of neurons, all intricately connected.

In the human body, the neural system integrates the activities of organs based on the stimuli, which the neurons detect and transmit. They transmit messages in the form of electrical impulses and convey messages to and from the sense organs. Thus, the nervous coordination involves the participation of the sense organs, nerves, spinal cord, and brain.

One of the most complex organ system to ever evolve, the human nervous system consists of two parts, namely:

There are 2 parts consist in C N S

What is the brain? 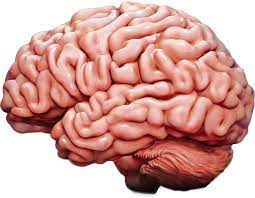 The brain is a complex organ that controls thought, memory, emotion, touch, motor skills, vision, breathing, temperature, hunger and every process that regulates our body. Together, the brain and spinal cord that extends from it make up the central nervous system, or CNS.

What is the brain made of?

Weighing about 3 pounds in the average adult, the brain is about 60% fat. The remaining 40% is a combination of water, protein, carbohydrates and salts. The brain itself is a not a muscle. It contains blood vessels and nerves, including neurons and glial cells.

What is the gray matter and white matter?

Gray and white matter are two different regions of the central nervous system. In the brain, gray matter refers to the darker, outer portion, while white matter describes the lighter, inner section underneath. In the spinal cord, this order is reversed: The white matter is on the outside, and the gray matter sits within.

Gray matter is primarily composed of neuron somas (the round central cell bodies), and white matter is mostly made of axons (the long stems that connects neurons together) wrapped in myelin (a protective coating). The different composition of neuron parts is why the two appear as separate shades on certain scans.

Each region serves a different role. Gray matter is primarily responsible for processing and interpreting information, while white matter transmits that information to other parts of the nervous system.

How does the brain work? 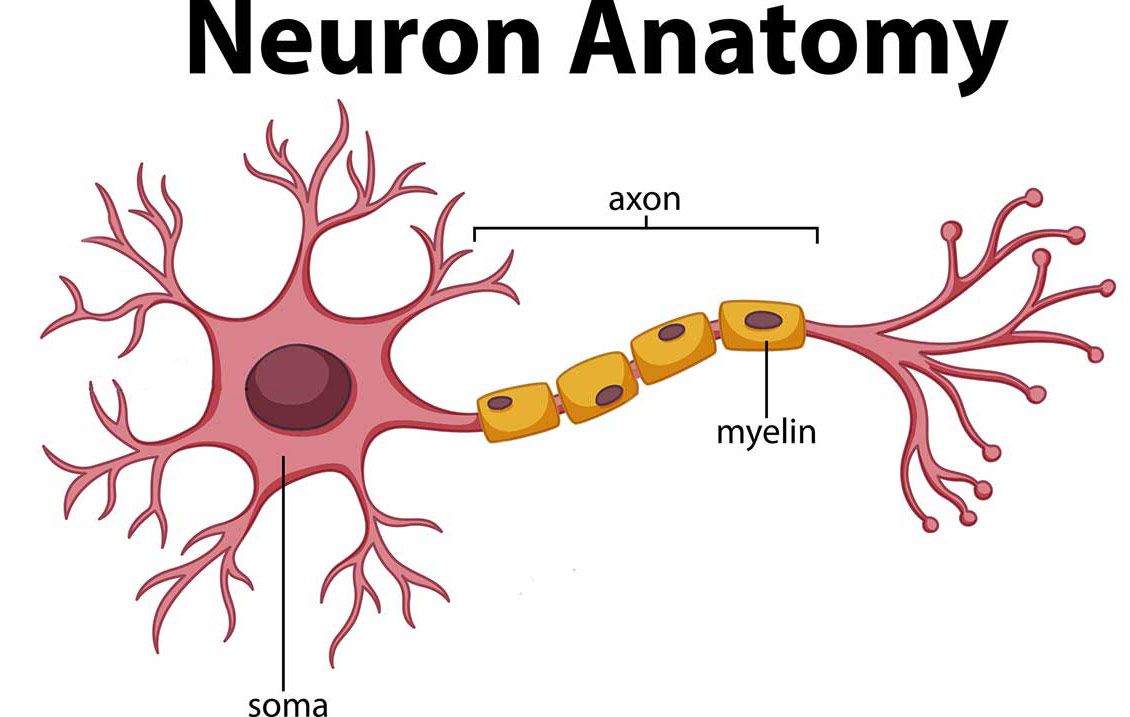 The brain sends and receives chemical and electrical signals throughout the body. Different signals control different processes, and your brain interprets each. Some make you feel tired, for example, while others make you feel pain.

Some messages are kept within the brain, while others are relayed through the spine and across the body’s vast network of nerves to distant extremities. To do this, the central nervous system relies on billions of neurons (nerve cells).

Main Parts of the Brain and Their Functions

At a high level, the brain can be divided into the cerebrum, brainstem and cerebellum.

The cerebrum (front of brain) comprises gray matter (the cerebral cortex) and white matter at its center. The largest part of the brain, the cerebrum initiates and coordinates movement and regulates temperature. Other areas of the cerebrum enable speech, judgment, thinking and reasoning, problem-solving, emotions and learning. Other functions relate to vision, hearing, touch and other senses.

Cortex is Latin for “bark,” and describes the outer gray matter covering of the cerebrum. The cortex has a large surface area due to its folds, and comprises about half of the brain’s weight.

The cerebral cortex is divided into two halves, or hemispheres. It is covered with ridges (gyri) and folds (sulci). The two halves join at a large, deep sulcus (the interhemispheric fissure, AKA the medial longitudinal fissure) that runs from the front of the head to the back. The right hemisphere controls the left side of the body, and the left half controls the right side of the body. The two halves communicate with one another through a large, C-shaped structure of white matter and nerve pathways called the corpus callosum. The corpus callosum is in the center of the cerebrum.

The brainstem (middle of brain) connects the cerebrum with the spinal cord. The brainstem includes the midbrain, the pons and the medulla.

The cerebellum (“little brain”) is a fist-sized portion of the brain located at the back of the head, below the temporal and occipital lobes and above the brainstem. Like the cerebral cortex, it has two hemispheres. The outer portion contains neurons, and the inner area communicates with the cerebral cortex. Its function is to coordinate voluntary muscle movements and to maintain posture, balance and equilibrium. New studies are exploring the cerebellum’s roles in thought, emotions and social behavior, as well as its possible involvement in addiction, autism and schizophrenia. 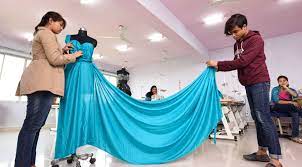 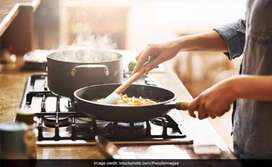 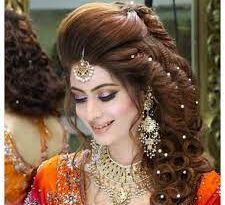 Center location All Over India